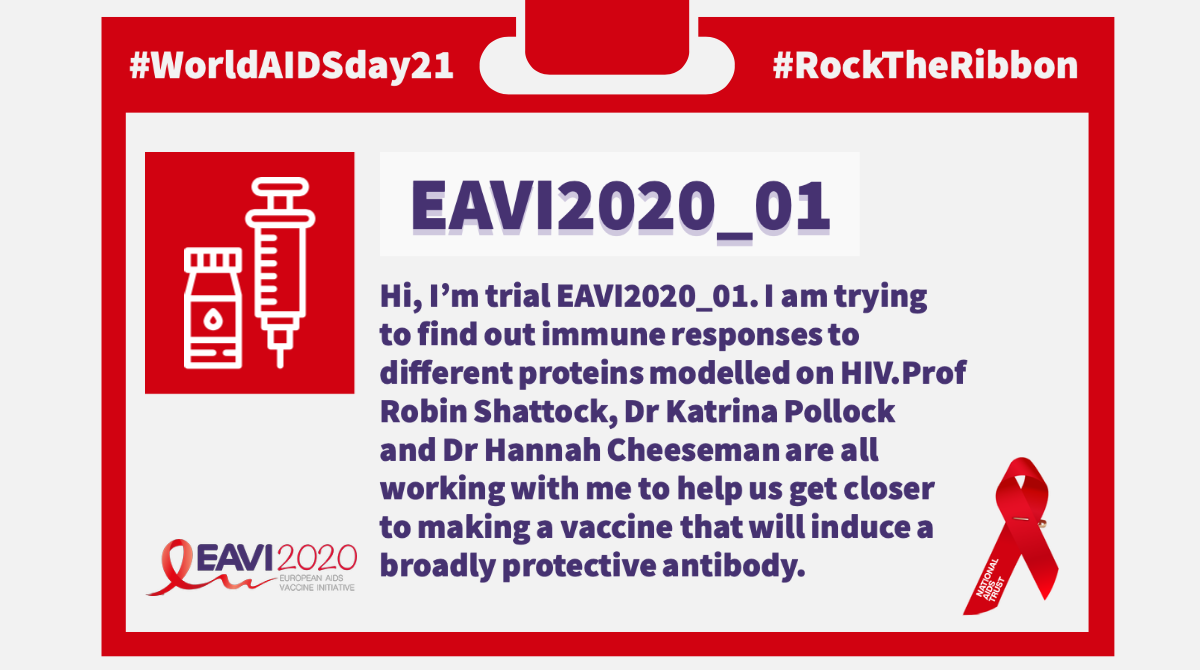 Hi! I am trial EAVI2020_01. Here at Imperial College London, both scientists and clinicians are leading my study which is modelling the interaction between rationally designed synthetic model viral protein immunogens (EAVI2020_01). We are studying immune responses to several different proteins that are modelled on HIV. The immunogens have a protein-adjuvant design and are given as an injection into the arm.

Vaccines are typically developed by focussing on the infection and not the immune response. The effectiveness of these vaccines is dependent on how most of us would usually respond to the infection if we were to come into contact with it. This strategy for making vaccines is restricting. For example, almost everyone who gets exposed to HIV will develop life threatening diseases without treatment.  The usual immune response is not protective.  The EAVI2020_01 study takes a different approach. Proteins that mimic the hidden parts of HIV are given several times to shepherd the body’s response precisely to make antibodies. The aim is that these antibodies will be broadly protective against all strains of HIV.

The goal of HIV vaccine research is to make vaccines that induce broadly protective antibodies. This study will tell us how close we are to being able to do that. A successful outcome would pioneer the design of new vaccines for HIV and other highly challenging infectious diseases.

Find out more about the other EAVI2020 trials taking place. 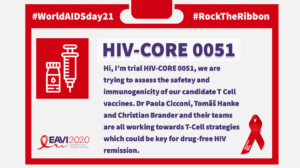 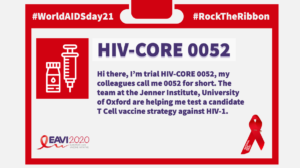 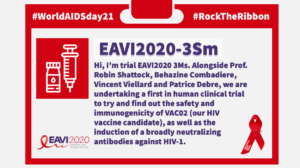 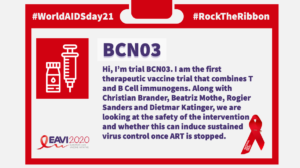 To donate and show your support, go to the National AIDS Trust website

For World AIDS Day 2021, the EAVI2020 clinicians and researchers are shedding a light on the EAVI2020 clinical trials that aim to help accelerate the search for an effective HIV vaccine. Every year on 1st December since 1988, World AIDS Day is an international day dedicated to raising awareness of the AIDS pandemic caused by the spread of the HIV virus. According to WHO, since the beginning of the pandemic, 36.3 million people have lost their lives and it was estimated that there were 37.7 million people living with HIV at the end of 2020, over two-thirds of whom (25.4 million) are in the WHO African Region.

It is a day to remember those who have perished due to AIDS and that international research projects such as EAVI2020, are continuing the fight to find an effective vaccine for the HIV virus that has so far evaded eradication for the past 30+ years. Learn more about EAVI2020’s clinical trials and what the dedicated consortium of researchers and clinicians aim to achieve.